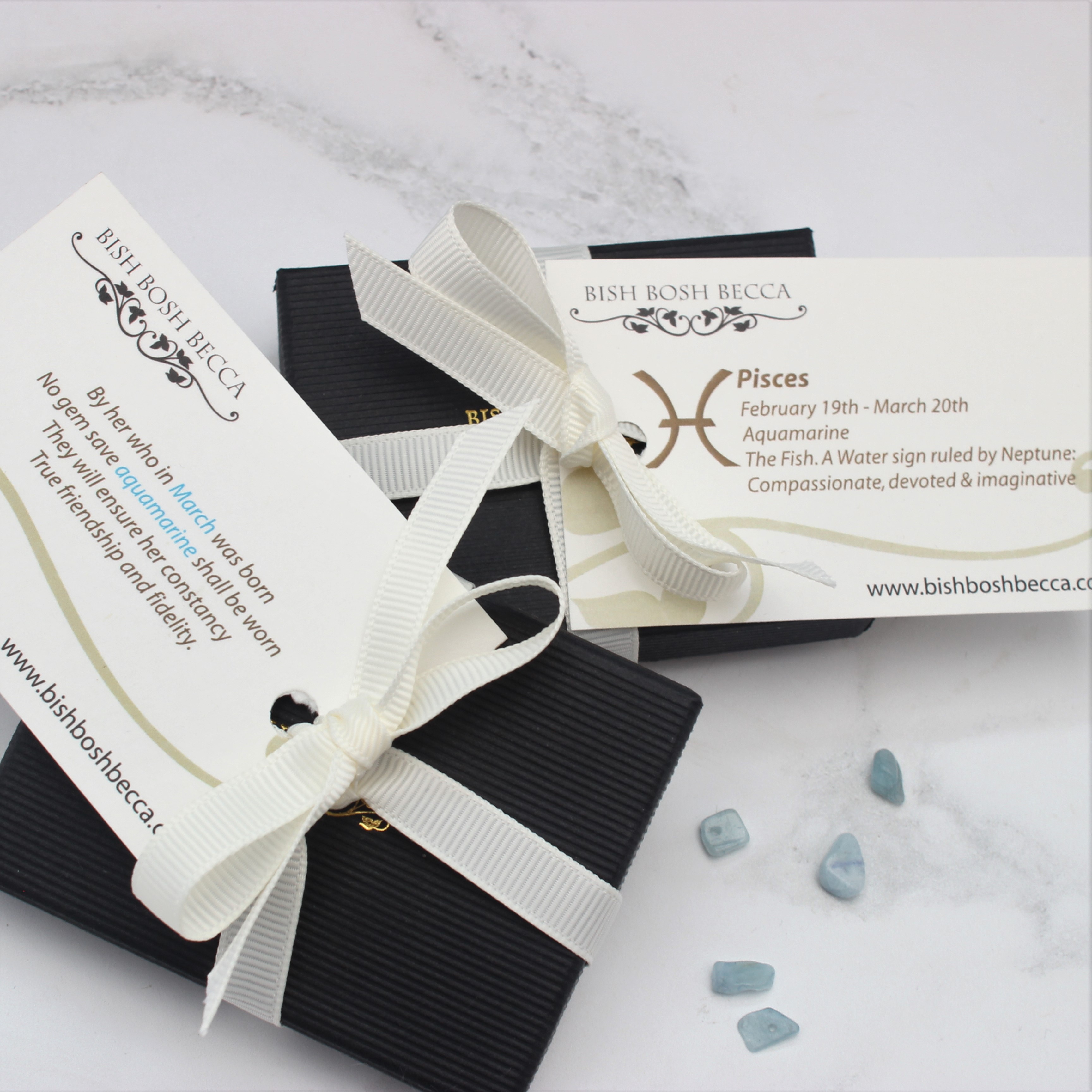 The symbol of the fish is derived from the Ichthyocentaurs (a pair of centaurine sea-gods with the upper bodies of men, the lower fore-quarters of horses, and the serpentine tails of fish. Their brows were crowned with a pair of lobster-claw horns. They were called Bythos (Sea-Depths) and Aphros (Sea-Foam).), who helped Aphrodite when she was born from the sea. Most mortals would run a mile when confronted by such beasts!

The astrological symbol shows the two fishes captured by a string, typically by the mouth or the tails. The fish are usually portrayed swimming in opposite directions; this represents the duality within the Piscean nature. They are ruled by the planet Neptune.

According to one Greek myth, Pisces represents the fish, sometimes represented by koi fish, into which Aphrodite (aka Venus) and her son Eros (aka Cupid) transformed in order to escape the monster Typhon, the “father of all monsters,” had been sent by Gaia to attack the gods, which led Pan to warn the others before himself changing into a goat-fish and jumping into the Euphrates. A similar myth, one in which the fish “Pisces” carry Aphrodite and her son out of danger

Another myth is that an egg fell into the Euphrates river. It was then rolled to the shore by fish. Doves sat on the egg until it hatched, out from which came Aphrodite. As a sign of gratitude towards the fish, Aphrodite put the fish into the night sky. Because of these myths, the Pisces constellation was also known as “Venus et Cupido,”

Bringing you into slightly more modern times. In the January 1970 edition of the Avengers the supervillain group Zodiac introduced the member “Pisces” whose abilities allowed him to live underwater, which included fins, scales, and gills.

Imaginative, These natives are very creative and imaginative, and they can think abstract and come up with out-of-the-box ideas. Their powers of imagination can help them scale great heights.

Kind, They are very soft people who will treat others exactly as they want others to treat them.

Compassionate, The people born under this Sign are always in a helpful mood. As they can feel for others, they always sympathise with others and try to help them out.

Intuitive, They are very intuitive. More than rational reasoning, facts and figures, they rely on their intuition while taking a decision.

Sensitive, Affectionate and gentle, they are very sensitive. If there is a setback, it affects them deeply, and they develop extreme feelings regarding the matter.

Selfless, A Fish will go out of his way to help others. However, their selfless deeds may not always be recognised by others.

(hey we all have our bad points so cut them some slack!)

Escapist, They tend to be escapists. When things go wrong, they will blame it on their bad luck or something else and avoid dealing with it fair and square.

Idealistic, They are very fussy about how things should be. Since they are very idealistic, sometimes even the best work can seem mediocre to them.

Weak-willed, They get hurt and demoralised very easily. Even with all the talent and resources they possess, their low self-esteem becomes a hindrance in their path.

Over-sensitive, The Fish tend to make a mountain out of a molehill. They take everything to heart and become emotional in the extremes.

Pessimistic, If things don’t turn out as per their expectations, the Fish can lose the motivation to carry on. They tend to look at the negative side more than the positive side of things

Lazy, The Fish can be very lazy about things that don’t matter to them. Their enthusiasm and energy levels last only for a short time

So there you go, Pisceans in a nutshell. So if you are struggling to find her the perfect gift whether it be for a christening or birthday, do have a look and see if you can find then a present they will cherish. x